Pastoralists in northwest Namibia are suffering from a hard-hitting drought. Effects of drought are complex, however, local pastoralists have particularly felt two, related effects. First is inadequate pasturage for livestock. Second are the increased threats posed by carnivores to people’s herds. Early-on in the drought wildlife conglomerated around water-points, likely leading to increased hunting success by carnivores. As the drought continued, wildlife numbers fell, though buoyed carnivore numbers remained inflated. As a result, carnivores turned their efforts towards locals’ livestock.

Residents are particularly concerned about the threats posed by the region’s population of African lions (Panthera leo). Though lions are not responsible for the majority of livestock losses, residents appear particularly intolerant and fearful of lions.

Our work examines the interactions between humans and lions in northwest Namibia as an on-going challenge with both social and ecological valences. How lions effect people, and the manner in which contact between people and lions occurs, is both a conservation and human livelihood concern. Our work is field-based, relying upon immersive techniques: only community-based outcomes will be sustainable.

Data collection is only the first part. We are developing locally-driven, appropriately-scaled solutions for local pastoralists without compromising the long-term viability of the region’s lions. The desert-adapted lions are a behaviorally unique population and thus present a unique set of problems for residents; meaningful progress in addressing human-lion conflict will be locally-driven and inclusive if it is to be successful. We are working closely with residents and advised by a knowledgeable interdisciplinary team of conservationists, both within Namibia and abroad.

Heydinger, J. (under review) Lions and the Reproduction of White Supremacy in Northwest Namibia. 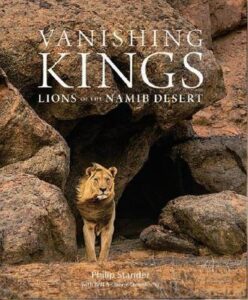 Stander, P. (2010) The impact of male-biased mortality on the population structure of desert-adapted lions in Namibia.

Stander, P. (2008) Tourism and the Conservation of Desert Lions in Namibia.

Stander, P. (2004) Population ecology and distribution of lions in the Kunene and Erongo Regions, Namibia. June 2004.

Stander, P. (2000) Conservation of lions and other large carnivores in the Kunene Region, Namibia. January 2000.